My wife has cancer, and it sucks.

Hey amigos, it’s been a while since I blogged but I’ve got a lot going on and I need a place to talk about it.

The two of us, my partner and I, have been cruising around the South Pacific on a small sailboat since my post-doc contract ended in 2017. While we were in New Zealand early this year, she made an appointment to have a breast lump checked out and after a few weeks of exams and imaging and biopsies, we found out it’s cancer. 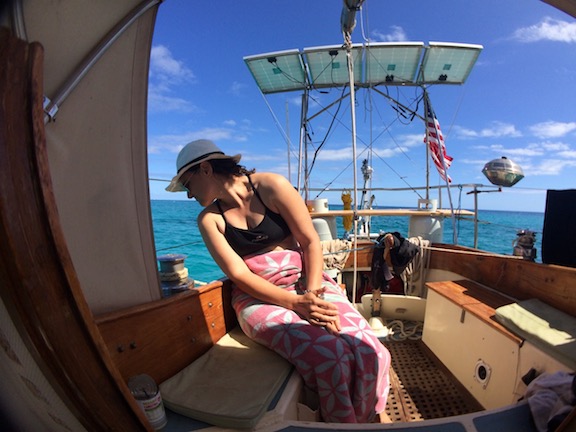 This came as a pretty big shock for us since she’s 39 and has no family history of breast cancer and when she did a popular genetic test a few years back, it came back negative for the dangerous breast cancer genotypes. But anyway, there we were, sitting on our boat (no insurance, no income) and getting some pretty shitty news. Happy to say, things have gotten better in the three months since then.

We’re back in the US now - Madison, Wisconsin - and she’s getting good treatment. So that’s the most important thing. She’s three treatments into her pre-surgery treatments and the tumor has shrunk till I can’t feel it any longer. Her doctor says that she can skip the fifth and sixth treatments if some scans go well in a few weeks. Then it’s into surgery and twelve months of follow-up chemo, but those won’t have the most debilitating drugs that she’s getting now, in the pre-surgery chemo.

Medicaid is covering her treatment - we’d qualify anyway because we have no income, but there’s also a special breast cancer program with looser limits and expedited enrollment. That speaks to one good thing about her diagnosis: since she has the most common cancer for women, the treatment is well-understood and there are really good systems for her support. For instance, she has a special rowing team that meets twice a week and is made up entirely of breast cancer survivors. And there are private foundations who’ve helped her get some cash and transportation and a wig.

We’ve also fallen back on a really supportive group of friends. We’re staying right now with Marc and Jenny, a couple we’ve known since my grad school days here. Later in the year, we’l be moving in with Jen and Mike, another pair of friends from those days. They’re wonderful and we couldn’t make it without their support. Kate’s incredible and that’s good because people actually like her and want to help her. I’m lucky to be able to draft on her.

For my part, the transition from sailing to care-taking has been both tough and easy, in turn. I haven’t yet found work so part of me feels like I’m not contributing to our upkeep. But the time we spent sailing has helped free me from the habit of defining myself by my employment. It’s enough to be alive and trying to do good.

To that end, I’ve been keeping busy with yardwork for the firend who are housing us, some painting and flooring work for some other friends, and boat work on a volunteer basis at the local university’s sailing club. The bike ride down to the university is just about the most glorious experience I’ve had in this place. Cycling was one of the things I missed most while living on Argo. God, but I feel like a king when I’m rolling along with ash and maple branches overhead, sweating in the afternoon sun and lilac. If only I had a more comfortable bike seat!